Things I found out after I left

As a Mormon, I was taught that anti-Mormons were my greatest enemies. They were either former members who were offended by some experience in the church, and were carrying out their revenge on the people who wronged them; or, they were people with Satan-inspired motives who used alternative religious ideas to sow discord among the saints. In any case, their main weapon was ANTI-MORMON LITERATURE!!! Exposure to anti-Mormon literature was so risky, that if you even laid eyes on a paragraph that started to express a criticism of the church or its history or its leaders, you needed to stop reading and get away from it immediately. It was from the devil, and it didn't matter what it said; it was just a collection of lies made to draw you away from god.

When I stopped believing in the church, the effect of this fear conditioning wore off, and I was able to explore perspectives on my church and its history that didn't come from the approved, vetted reading list. I learned that some of what I had heard as a member was true: there were disaffected members who were willing to exaggerate claims about church history and paint church leaders in the most negative light. There were people who actively wanted to draw people out of the church. However, those voices made up a tiny percentage of what I heard.

Because Mormonism is a relatively young religion, its history is accessible. Many of the source documents that were used by church-hired historians to write approved church curriculum over the decades are now available to the public. Instead of absorbing church history through the church's filter, people can access, share, and discuss it directly. Much of what used to be labelled anti-Mormon lies has turned out to be historically, verifiably true.

In this entry, I'll mark links to official church sources in green.

I was always taught that Joseph Smith was never personally interested in polygamy, but it was a commandment he received directly from god, and god kept urging him to take on additional wives against his own wishes. What I discovered was that his first "plural" wife was actually a 16-year-old who worked as a maid in his home: Fanny Alger. His relationship with Alger began in the mid 1830's. There's some scant evidence from letters and journals to suggest that Joseph's wife Emma caught them together in a barn and that Emma later kicked Fanny out of the house. What isn't scant or controversial is the fact that Joseph didn't record his "revelations" about polygamy until many years after the relationship with Alger.

Also, there were parameters around what kinds of relationships were acceptable to justify polygamous marriages. Joseph Smith violated these parameters, being married to several dozen women ranging in age from 14 to 56 years old. On several occasions, he sent guys on missions, and married their wives while they were gone.

My opinion of polygamy would have been very different had I known the extent of Smith's sexual behavior, and how it tracks with examples from American religious leaders through history like Jim Jones, David Koresh, and Warren Jeffs.

One of Smith's most important gifts as a prophet was his god-given ability to translate languages. The church always told me Joseph translated the Book of Mormon from ancient gold tablets like this: 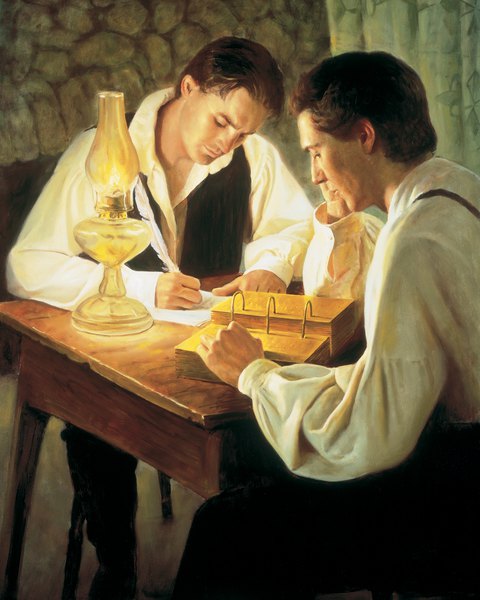 Image attribution
The official church story about how Smith translated the plates is so silly on its own, I almost can't meaningfully juxtapose it against the historical reality. Suffice it to say that Joseph's story and method around translating the Book of Mormon is basically an extension of a folk magic practice that he and his dad used to defraud gullible farmers out of their money with the hollow promise of finding ancient Native American buried treasure.

Conveniently for Smith, the same angel that gave him the plates took them back again, so we just have to take him on his word that the plates were real and that he correctly translated the language. Every "translation" that Smith performed for which we have the existing originals has either been proven by scholars to be a mistranslation or fraudulent.

There is a systemic, legally-enabled phenomenon of sexual abuse in the church. Vice news released an article and video series with some survivors and their families who got caught between members of the church who were sexually abusive and the church's legal department. An upcoming documentary created by Brian Knappenberger, and released at last year's Sundance film festival, documents an array of sexual abuse coverups carried out by the church and the Boy Scouts of America. He and his team discovered that the density of the problem of institutional sexual abuse in the Boy Scouts and the Mormon church is greater than that of the Catholic church.


The combined income from all of [the church's] business interests is relatively small and would not keep the work going for longer than a very brief period.
This quote is still used on the church's gospel topic essay on church finances. However, we know from a recent leak originating from a former employee of the church's financial investment arm that the church is basically a hedge fund with a church on the front end. At the time of the whistleblower's report, the fund was worth $100 billion. According to the whistleblower, the church scrapes about 15% of the globally-collected income from tithing, and stuffs it into a managed stock account. This fund is designated as a tax-exempt charitable fund, but the only money ever dispersed from it has gone into two bailouts: one for a church-affiliated insurance company, and another for a large church real estate development.

The church requires that all members (beside the church's most senior leadership), no matter how rich or poor, give ten percent of their income to the church as tithing. Following this commandment, they say, is a prerequisite to holding a temple recommend. Holding a temple recommend is a prerequisite for entering a Mormon temple, where members get the secret handshakes and passwords that will allow them into Mormon heaven.

I decided I could never believe in Mormonism again after encountering Scientology and realizing that its absurdity was mirrored in the faith I grew up with. Giving myself permission to learn more about my church from a liberated perspective helped me feel like I wasn't crazy, being surrounded with family and friends who were mostly devout Mormons. I don't necessarily advocate for other Mormons to get into the weeds with church history or critical literature like I did, but anyone wanting to learn more should check out some resources. For devout Mormons who want to stay inside a church-approved ecosystem, the Gospel Topics Essays are a pretty good resource that attempt to address some of the issues that have been spotlighted as problematic by members and critics, mostly in the last decade. Another comprehensive resource that highlights the church's truth claims and history from a more critical perspective is the CES Letter by Jeremy Runnels. Runnels was experiencing a crisis of faith after encountering information about the church online that disagreed with many of the official narratives. Runnells was prompted by a family member to document the specific issues that were troubling him and send them to a scholar who worked in the church's education system. Runnels never received a reply, and instead published his questions and research publicly. The document has become an extremely controversial piece of criticism in the Mormon world. Many members have defected from the church after reading it, and contending with its contents.