Okay... That sounds fine. The emphasis is a little different than what I thought this whole mission was about, but that could work
And before long they were like


Everybody has a need. When you first meet them, try to determine what their deepest wants, fears, and values are. Then, tell them how the Mormon church and its teachings will lead them to get what they most strongly desire
And then they led me and a bunch of other missionaries in training through classroom exercises that simulated "missionary experiences" like door-to-door contacting, walking street encounters, and home education visits by appointment; all the while, encouraging us to always tie our message of Mormonism back to the intel gathered in the first phase of contact.

When I left the missionary preparation center in Utah, and arrived in the mission field in Italy, I was led in exercises by more experienced missionaries and senior mission leaders who basically continued the training program along those lines - tactics and strategies that would help me find, teach, and sell my message to individuals "whom the Lord had prepared to receive it."


There's probably a lot about missionary life that wouldn't come as a surprise to an outsider. Missionaries live in an insular, monitored environment. They're generally forbidden from accessing entertainment, media, and news — except from a narrow selection of church-created content. They meet together with other missionaries and do all the Christian elevation emotion things you could imagine.

The thing that came as a shock to me is that underneath all of it is a quota and accountability system pulled straight from the world of high-pressure sales. All the essential functions of baptizing people as members of the church are boiled down to key indicators: new marks contacted, lessons taught, baptisms performed.

I was slightly averse to this system at the jump, but it didn't take long to get hypernormalized to it, especially when my environment was so intense and didn't leave a lot of room or time for serious reflection. Something happened there one summer, though, that gave the aquarium a little shake.

I was in my first area — a town called Oristano. My trainer (a.k.a. my first post-training center companion, a.k.a. my "dad") had just been transferred to another area. He and I had a rough go in Oristano. It was a small city. We only were able to really teach one guy. The rest of the day we spent "looking" for people: knocking doors, passing out ad cards on the street, calling numbers in a phone bank of people missionaries had taught previously. It was a slog.

My new companion was this six-nine MF from Cottonwood Heights, Utah. He's literally the only missionary companion I had that I didn't like. He was an asshole.

He was into the hair shirt approach to missionary work. He (and by enxtension, I) would skip lunches and skip p-days pretty often; he was a stickler for the rules. Even though I was still struggling to learn the language, he only ever spoke to me in Italian. Never asked me about my life before the mission or my interests. Talked a lot of shit about all his previous companions.

One day we were out on a really hot day doing street contacting, and we found ourselves on an empty street during the lunch hour. Walking around a corner, we saw this scraggly guy with a straw cowboy hat. We said "Ciao" and he responded in English. He was an American backpacker making his way through Sardegna.


Do you guys know of a supermarket close by that will be open during the lunch hour? I'm starting to get hungry and I need to just get a can of tuna or something
My companion said


Well, why don't you just come back to our apartment and have lunch with us?
This was an earth-shattering proposal, as it rang in my ears. The only rules I ever saw this guy break were the rules about the schedule; and he only broke them as a way to suffer more with pointless missionary work. There was a rule that you weren't supposed to let people into your apartment (or even tell them where you live) and that was a pretty big fuckin' rule.

As we were all walking together across town to our apartment, I was wondering why my companion had done it, and how it would be to have an insider in our little missionary world. When we got there, the American asked if he could use our groceries, and he cooked us a meal that we all shared together. We ate in the living area.

That's where we had our white board. It was like a tabled list with each of our "investigators" and how many times we'd visited them, and which invitations we had extended. The American kinda sat and slowly chewed his food looking at the board. He was like


So, they give you guys like a quota you have to fill?
I piped up and started to say


Oh, no. It's not a quota. We just set goals for ourselves to help us focus on being more effective missionaries...
As I described it to him, I realized


Oh shit. This is just a quota system
Things were weird already with this guy in our apartment, but they atmosphere got really cramped as he looked around at our shitty apartment filled with boxes of pamphlets and paperback copies of the Book of Mormon. He was visibly creeped out. He thanked us and GTFOed.

My companion shut the door after him and said


I shouldn't have done that. We're not doing that again
I don't think he was just being scrupulous about breaking a rule. I think he knew he committed on error that went deeper: he had lifted the curtain. He showed a potential investigator that although we may have had some public presentation that said


We're here for the love of God to spread a message of happiness
what we really were doing was carrying out a systematic method. That method, as stated in the church's own missionary field guide is to immediately start grooming investigators with a series of escalating commitments, ultimately leading to baptism. There were protocol for quickly identifying what kind of people you spent time with, and to give up early when signs of flakiness came up in order to not waste time on losers.

For me, the presence of a Philistine in our sacred missionary habitat had the effect of ruining the illusion I was under in the work. Like, even though I saw how the sausage was made in hours spent planning and tailoring individualized lesson plans and invitation flowcharts, I was able to focus on the personal, spiritual, sausage-eating experience when we were physically meeting with people. Somehow, seeing someone who would have been a name on that board (if he'd let us teach him) gaze at the board itself broke some scaffolding that allowed me to compartmentalize my identity as a corporate drone away from my identity as a carefree Christian missionary whose only agenda was to share a message of hope.

And even though the compartmentalization broke down, I continued for another year and a half to sell my little heart out for the church.


In terms of missionaries in Italy, my numbers weren't bad. Honestly, the city and the existing Mormon congregation was everything. I had areas where we literally recorded zeroes for weeks at a time — no baptisms, no lessons, no contacts. And I had areas where we pulled off multiple baptisms in a six-week period.

Every week, we reported our numbers up the chain. In my worst area, our mission president sent his assistants (the highest-ranking companionship in the mission) to our city for a couple days to see what we were doing wrong and to get those numbers up. One of the assistants had literally been a Dish Network salesman or some shit before the mission, and he showed me how it was really done. We posted up on a busy bridge in the town and cornered people, asking them to take a pass along card. He literally told me


Don't accept the first or the second "no" that someone gives you. Sometimes they'll let you talk if you just keep following them
He literally would walk lock step behind people and keep talking over them as they waved their hands and refused. After 14 hours of cold contacting and door knocking, the assistant looked fucking haggard. I mean, I didn't love that city, having no success day in a day out, but this guy wasn't ready for how cold the city was.

When the missionary work was good, though, things were very different. The local members were usually happy that you were bringing fresh blood in. The mission leadership would praise you and sometimes ask you to conduct a training for other missionaries in your area. But, the best part was that you made other missionary companionships jealous. It was considered a little gauche to come right out and ask for a missionary pair's numbers (if you weren't receiving a direct report), but people talked, and the numeric system became one of the main pillars of a missionary's reputation.

So next time you meet a pair of these dorks 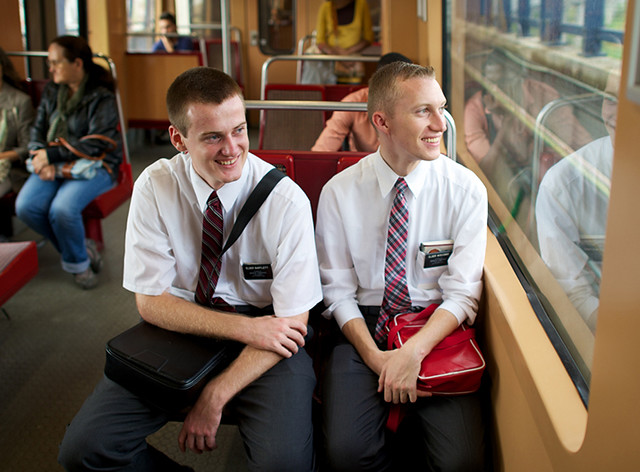 just know that if you decide to talk with them there's a creepy whiteboard back at their apartment along with an Area Book where every subsequent interaction they have with you will be recorded in detail.