My favorite movie of all time is 2001: A Space Odyssey. Like, my second favorite is not even close. I love the story. I love the music. I love the silences. I love the spare script. I love HAL. I love Dave. I love the ape family. And I love the bizarre ending that doesn't throw you a bone, by way of explanation.

It seems that professional critics agree that it's one of the best (if not the best) of films ever made. Not that that matters to me; I don't even know what constitutes the authority of film critics. I could probably write a couple thousand words on how little I care for professional critical opinion in the arts.

But this movie is so many things to me. Like, there are movies that just get you in a vulnerable period, or at a critical age, and they have a place with you because of how they came into your life. For some people my age, maybe that movie is The Notebook or Dumb and Dumber or The Land Before Time or some shit. For me, it has been 2001.

I don't remember exactly how old I was when I first saw it; I'd guess like 16 or 17. What I do remember was the experience. From start to finish, I was sucked further and further into what was going on.


2001 is pretty plot-light throughout. There's like 45 minutes of monkeys screeching and fighting at the beginning.

Then there are spacecraft motion sequences set to music for 20 minutes.

Then there's a weird PR drama on a space station.

Then there's a crew of astronauts who have to battle for their lives against an intelligent computer who's managing their mission.

The robot fight chapter is the closest thing to a typical attention-holding movie sequence, and even that part moves like molasses.

What was so disorienting to me (and probably to everyone who has ever really watched this movie) is the last chapter. It's a sequence of striking visual elements stitched and smash cut together, that changes setting and style as it pushes forward. It's kind of hard to describe. Like, it's a light tunnel, then it's liquid suspensions, then it's colored terrain and colored oceans.

And then it's even weirder. Like, it's the weirdest fucking thing ever. The protagonist finds himself in a furnished apartment with light tiles on the floor, and his perspective as a subject and our perspective as the audience sort of blend in this strange way while he progresses in jumps through the stages of middle- to old-age.

Finally, as he appears to be on his death bed, he is transformed into a glowing fetal being in a transparent membrane. And then he's all the sudden back at Earth, smiling at it and at us from an orbital distance.


Maybe more than anything, I love 2001 as an extreme expression of freedom: Kubrick's freedom in making it, the themes of Nietzschean freedom through the movie, and the freedom it seems to have from conventional style and storytelling.


I turned 30 late last year, and for my birthday, my wife took advantage of the pandemic shutdown to pale every past and future birthday gift by comparison, and get me a private movie theater showing of this film. 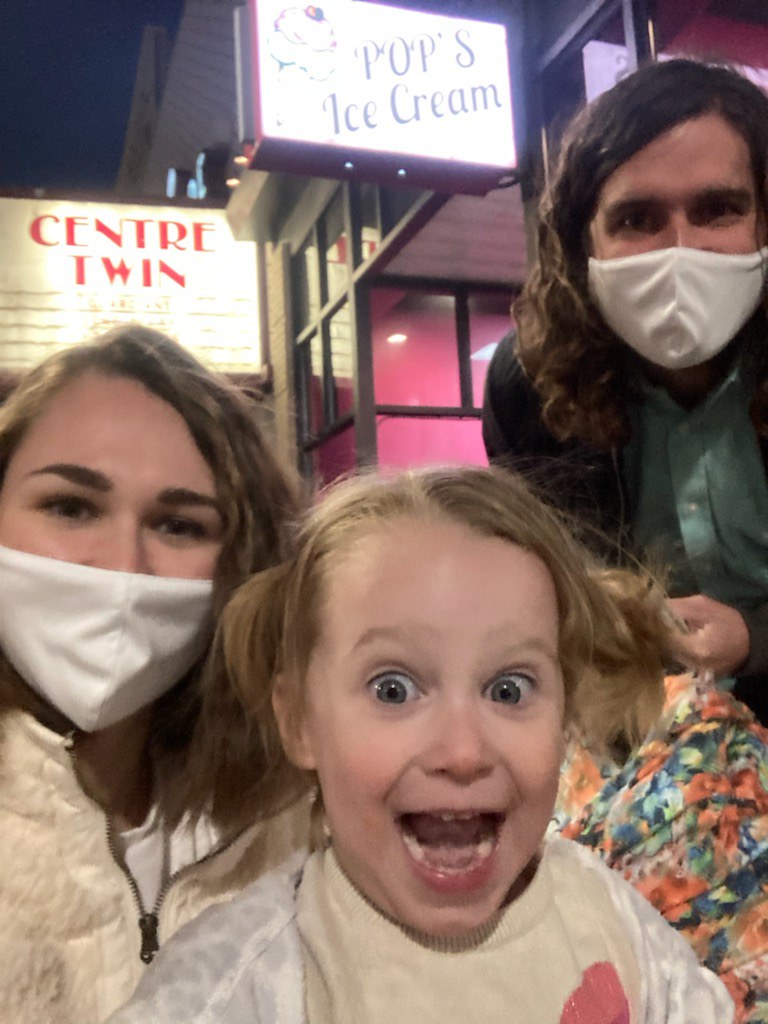 Going in, my only worry was that our two-year-old would be immediately bored and cause problems and melt down in the theater. As it turned out, she was fascinated by this movie. She basically watched the whole thing, besides the Heywood Floyd part in the space station.

On the ride home from the theater, she kept saying:


Baby in the moon. Scary baby in the moon.
That night, she was really freaked out. I went and laid next to her as she fell asleep, and she was trying to reassure herself, saying stuff like:


It's okay, Maggie. Baby's nice in the moon. Monkeys play. Monkeys are nice.
I worried we'd be dealing with nightmares, and I'd never get to watch this movie with her again. The next day, she brought up the "baby in the moon" movie, so I pulled it up on my laptop.


We've watched it like five times in the last couple months. She really likes the iconic Strauss bit Also sprach Zarathustra that's used in the title sequence and throughout the film.


She sings it all the time and asks to listen to it in the car, since she knows we can pull up songs by request while we're driving.


I think my wife thought it was cute how obsessed I was with this movie. I've watched it with her probably a dozen or so times. Now that the toddler is requesting it (or its soundtrack) on a daily basis, the charm seems to be wearing a bit off.

I'm delighted having discovered that my love for 2001: A Space Odyssey is so deep, it's heritable.